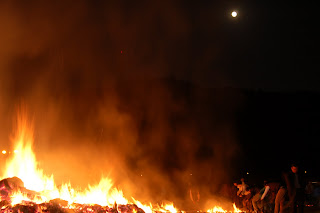 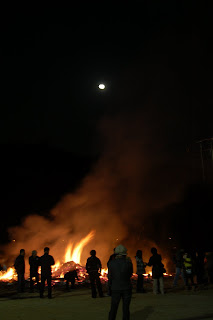 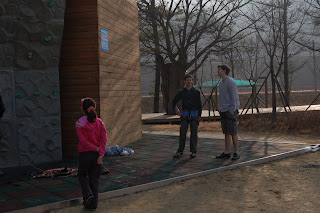 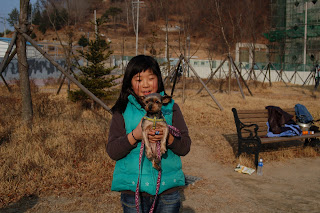 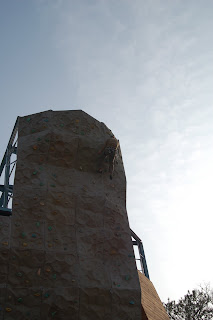 Last weekend we spent Saturday inside doing nothing but eating and sleeping.  All of our friends did the same too, must have been something in the air.  Sunday we took a ride out to Sancheong to go climbing at an outdoor wall.  It was a little chilly but still beautiful.  We brought Samjin and he had fun barking at some 10 year olds that were there.  One girl was actually not afraid of him and decided that she would be Samjin's doggy sitter for the day.  She walked him all around, made him run after her and made her friends play with him too, it was great.
Monday was the first full moon of the lunar new year.  In celebration of this there are lots of small bonfires out in the country and down by the river they built a big house and then burn it down.  I'm not quite sure the significance but it was fun to watch, we didn't get out of work until after the burned the house but we went down and saw the smoldering remains. They also take cans and but some sticks from the fire in and swing them around this is supposed to ward off disease for the year. It's actually a bit scary because the cans don't seem too safe and some people were not aware of who was around them.
Posted by Ana at 12:33 PM