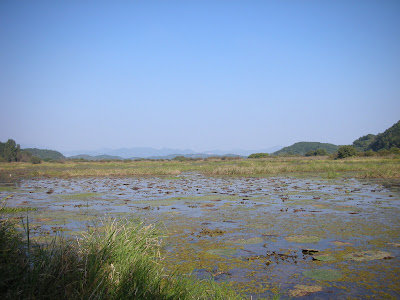 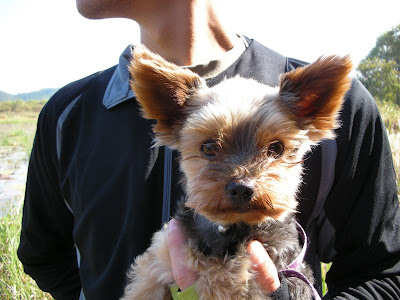 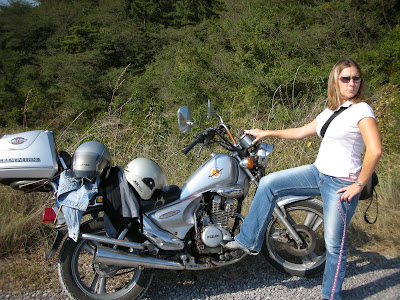 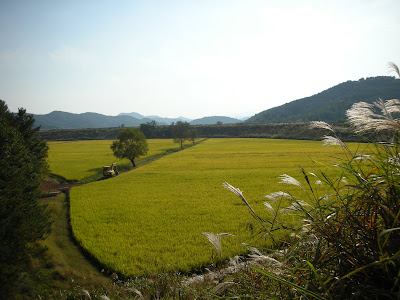 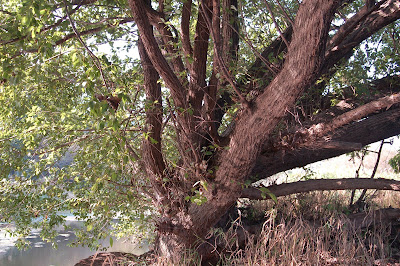 On Friday we strode out to our parking canopy and kicked our motorcycle into gear.
It took some kicking, but eventually the old mule turned.  We set out to find the Mopo Wetlands; The largest of its kind in Korea. It was perhaps the longest ride we have taken in Korea on the bike, clocking in at about an hour and a half.
The wetlands were very nice, and unique for Korea. There are only several still water grounds in the country. This being the largest.
Our journey there was pure country travel. Small farm-town Korea. It was nice. At several points we found ourselves on narrow concrete paths with 2 foot rain trenches on either side, snaking through rice paddies. Occasionally we had to stop and whip out the map to re-assure ourselves that we were somewhere in the right direction.
We finally arrived and got busy taking pictures. There were endless paths of patted down grass winding in all directions. We wandered around a bit taking in the unique site of marsh land, tall grass and birds galore.  As it was getting late, and with a long road ahead of us, we decided to journey back to Jinju.
With the sun setting we got back into town and biked through the traffic. The town, especially downtown, near the bridges, were bursting at the seams with people visiting from all over the country.  It took us a while to get through it but eventually made it.
We didn't stay long back at our apartment. We went out for some dinner and walked down the river towards the festivities and all of the illuminated silk statues that stood in the water. We met a friend from Daegu who was visiting for the festival briefly just to welcome him into our city.
We left the river area after the fire works to attend a "Fiesta" spanish themed party going on at Gyeongsang University across the city where some of our friends work. As the traffic was horrendous and all the attention focused towards the river it was by luck that we found a taxi willing to go in our direction after we walked almost half way there.
We got there a little late. Ana whacked at a beaver pinata. Then the crowd left for the SoundGarden bar nearby. We watched this awesome band. 2 girls and 1 guy. Koreans. The girls both sang, one played the bongo's and the other acoustic guitar. The guy played the Dijiridoo. Their songs were original and wonderful. And the performance was intense. It was some of the best original music I've heard since coming here.
After all the drinks we decided to get some food. So Dale, Christine, Ana, some Russian girl, and I walked to a nearby Kimbab Chun Guk place for many eats. I think we all managed to spill something on ourselves and Dale claimed to have been whipped directly in the eyeball with a noodle.
Christine and Dale were going rock climbing the next morning and suggested we should join them. I was vaguely aware of what agreeing to this meant at the time....
Of course the site is being lame. I will need more time to post the rest of the pics for this entry.
Posted by Michael at 11:20 PM

Enjoyed the overview of the weekend! I'm so jealous of all the fun you two are having! Keep the adventures coming! Love MAW