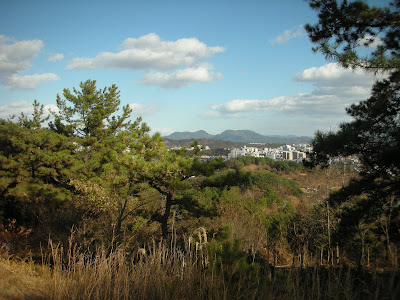 A slice of life 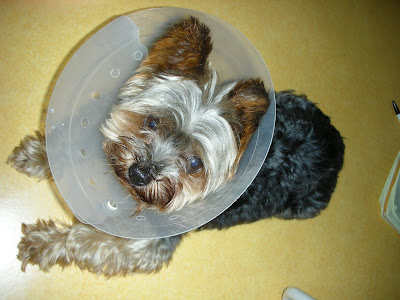 It can't be determined yet whether Samjin's "valve" is still just sore or officially botched from his recent Neutering, but I have noticed a speckled trail after he leaves some assailable curb or tree stem.  We'll wait this one out before bringing it up with our animal physician.
Samjin gave this woman a good scare earlier tonight as she walked with her small child. He snuck up behind them and barked. (He always barks at small children). "Ohmagod!" The woman burst out in Konglish reflexively.  Her use of "Oh my God" surprised me a little.
Here are some words that have been adopted from English and thoroughly Koreanized:
Ba-na-na.       Com-pyu-ta.    Ah-ee-suu Kuu-deem (ice cream).     Takshi (taxi).
Caem-eh-da (camera).  Kopee (coffee). Cheejuh (cheese). Peet-chja (pizza).
....Mostly these words  become so distorted you usually cannot make it out right away.
There isn't a Z sound in Hanguel, so they replace it with "ㅈ" which sounds closer to a "J."
i.e. 치 즈 ----Cheejuh. (words cannot end on a consonant sound so  usually the adopted words end with the "ㅡ" (euh sound).
The "ㄹ" is a cross between R/L but can also sound like a "D" in the right situation. For example : 나 라  the word for 'country'  sounds like "Nada."
Also there isn't a "V"  sound so that is replaced with the "B/P" sounding "ㅂ."
example: 바 나 나 ----Banana.  Nor is there an "F" sound,  so  "ㅍ" is used, which is a distinct and hard "P."as with Kopee --코 피. (coffee).
Well that's the lesson for now. The Korean alphabet is extremely logical and can be learned by anyone in a matter of hours.
A big Texan by the name of Oscar is back in Jinju after heading home for a few months over the summer. He's now living close by to our apartment in Pyeongadong. He's big and oiled like a professional wrestler and wears leather jackets. Some how its funny when he smokes his thin 'capri' cigarettes and flicks them off with cosmopolitan flair. I saw his leather figure walking all over the side walk the other day as I drove by in the back seat of a van packed with Korean mothers.
That afternoon was my final day teaching a mothers english class that met twice a week on Tuesdays and Thursdays. Being very kind and warm of heart they had taken me out to lunch, on top of buying me a chocolate cake from Paris Baguette. It was an Italian restaurant (Korean-ized Italian, of course) offering nice views on top of the Sky Palace building. On the 6th floor is a church where Ana and I used to take Korean lessons. We never would have known about this nice Kor-Italian restaurant all the way up on the 15th floor if it wasn't for those sweet moms.
Well it was pleasant, they mostly chattered on and I smiled.
Posted by Michael at 8:57 PM