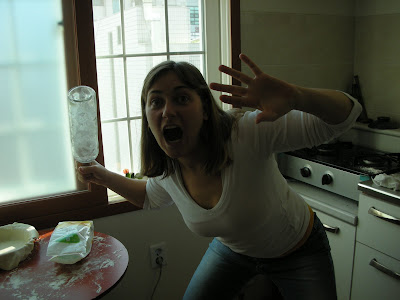 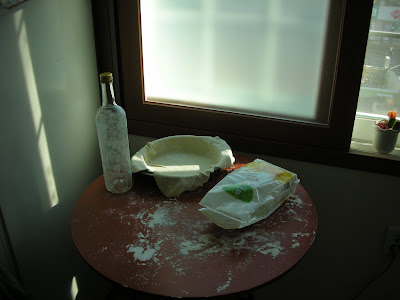 Classy....rolling out a pie crust with a wine bottle;) 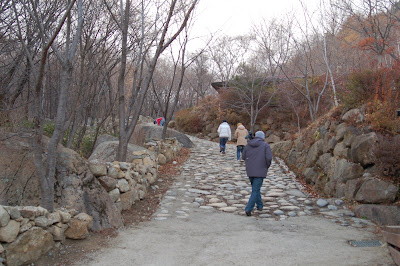 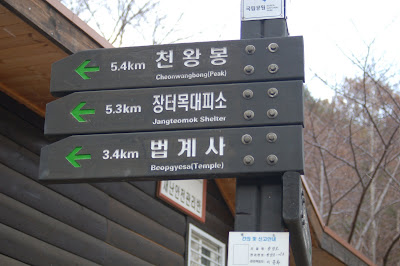 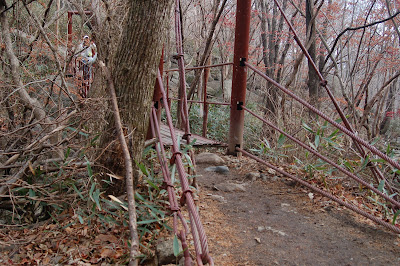 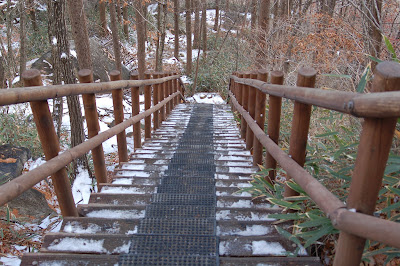 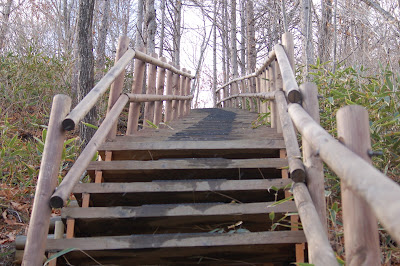 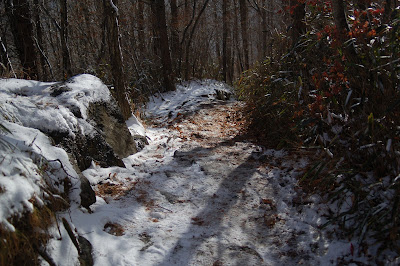 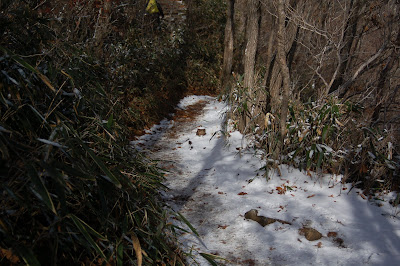 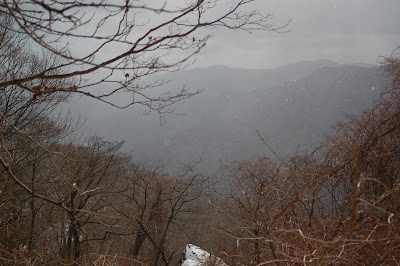 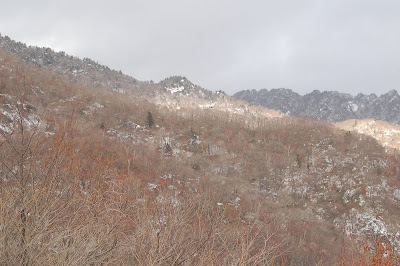 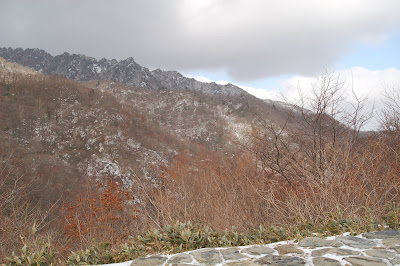 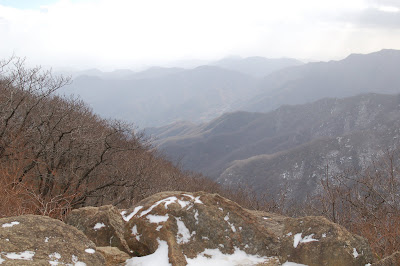 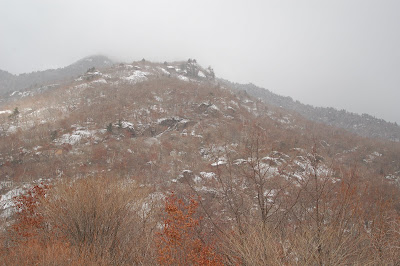 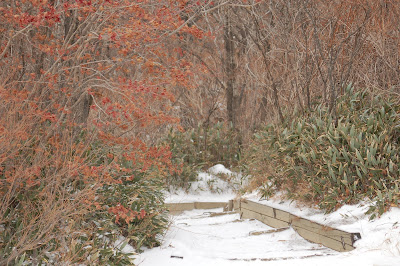 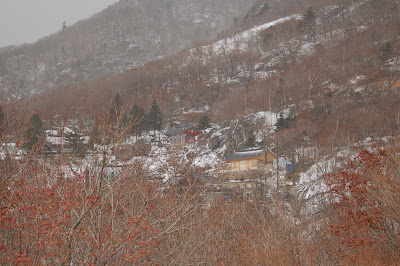 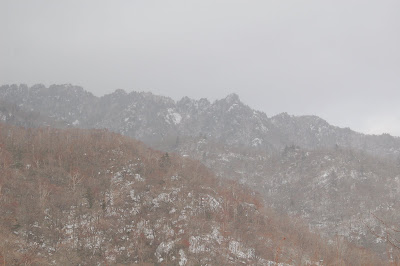 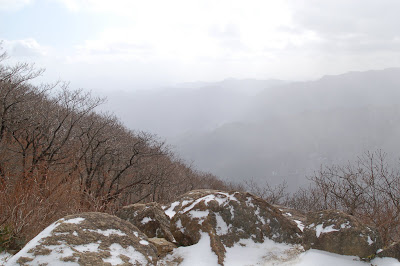 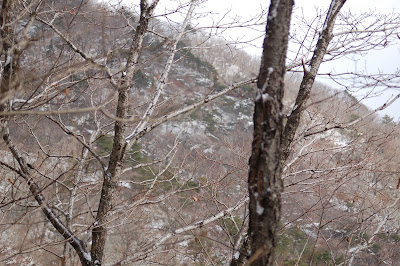 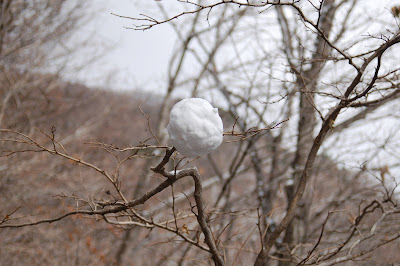 Snowball on a tree branch...sure why not! 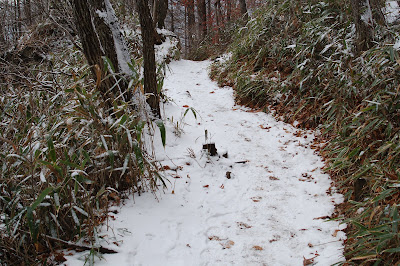 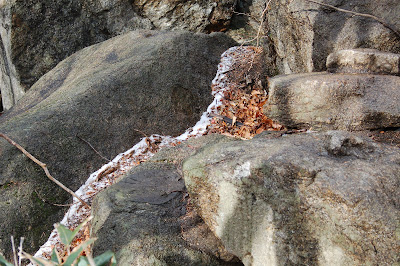 Silly me...I thought this would be all the snow 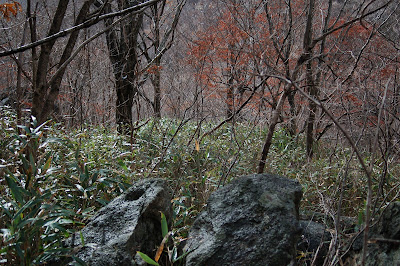 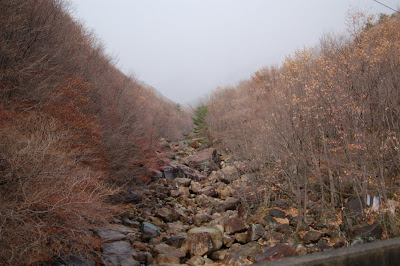 So, the plan for Saturday was to wake up early and go to Jiri-san to try and make it to the top...again.  Well, around 9am or so Mike still didn't want to get up and go, he was lacking motivation for a cold adventure, which is understandable on a Saturday morning.  However, I was not, so I got all dressed up and hopped on the motorcycle and off I went to Jiri-san.  About 15 min away it had rained or snowed so the road was all wet, I didn't notice but my legs got completely soaked from the knee down.  By the time I arrived my feet were soaked through and it was flurrying at the bottom of the mountain.  I had brought an extra pair of pants so I changed out of my jeans but I had no where to put them to dry so I hung them out of my backpack and started up the mountain.
There were far less people that the last time we went and I noticed there were definitely more men than women.  About an hour into the hike it had snowed and been cold enough for there to be snow on the trail (it was snowing the whole time but most of it wasn't sticking near the bottom, silly me thought it would be the same all the way up).  I don't own a pair of hiking boots so I was in running sneakers (that were still soaking wet) these aren't very conducive to hiking in snow and ice.  I got yelled at by a couple of Koreans, one guy "Shoe-ju NO! NO! NO!", but what was I to do at this point, I for sure wasn't going to turn back, so onward I went up the cold snowy mountain.
Near the temple I ran into some fellow 외국인 (foreigners) I took a picture of two of them and they marveled at my drive of coming up the mountain alone with only sneakers on, they were just as decked out as Koreans, needless to say not 5 minutes later I took a spill.  There is a shelter near the temple so I wandered in, not quite knowing what it was and ate my tuna sandwich and chatted with my new friends.  They were all very nice, from Busan in Korea, and mostly from Canada and the US at home. They were kind enough to give me a mini snickers! Yum! and a granola bar and they offered me more food.  They were staying at the shelter over night and then venturing up to the peak in the morning.  It was around 1pm when I got to the temple and after the snow and ice that I had already encountered I thought I would be wise to not go further.  So, I thanked my new friends for my food and headed back down the mountain.
It was a little tough near the top I was pretty careful and I didn't fall.  It's amazing the difference in temperature and weather between the top and bottom, I guess that's because the hike goes to high so fast.  Once at the bottom I put my jeans back on, they had dried a bit, and my two pairs of gloves and wrapped a poncho around the lower portion of my body, and my vest on top of my jacket and my three shirts and two sweatshirts, and my scarf around my face, and finally I was off!  It was a cold ride home but I made it back just before sunset with a frozen body, especially my fingers!  There will be yet another trip back as I have yet to make it to the top.
Last night we went and watched a band called the Utter Gutter Band, made up of musicians from all over the world who work here in SK.  It was quite fun to watch them and dance they play mostly rock cover songs.  But that means today my whole body hurts!
Today is our Thanksgiving, so I am making pumpkin and apple pie and we are going to have a gathering later.  I'm already working on the festivities with my glass of wine;)
Posted by Ana at 3:39 PM